APA NY Chairman, Travis Keyes, hosts APA “Open Talk” online group chat so we can come together as a community and share ideas on how to get through this turbulent time. 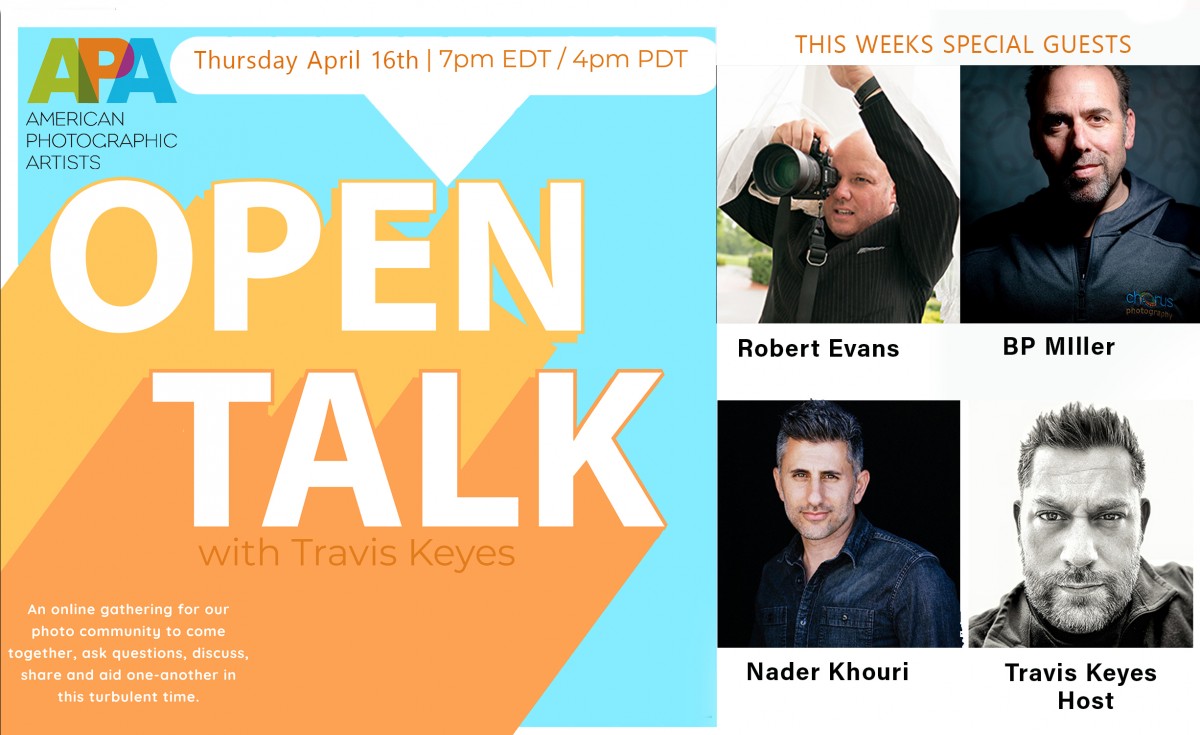 He is a recognized is a Sony Artisan of Imagery and one of the most highly acclaimed wedding photographers in the world. His personal humility, positivity, and dedication to his craft sets him apart as a once-in-a-generation photographer. The growing list of recognizable personalities in the film, music and business world who have sought out Robert Evans to photograph their weddings and private events include, Jason Aldean, Miranda Lambert, and Blake Shelton, Shania Twain, Yahoo CEO Marissa Meyer, Tom Cruise, and Katie Holmes, Brad Pitt and Jennifer Anniston, Trent Reznor, Jim Carrey, Jenny McCarthy, Christina Aguilera and Google’s Senior Vice President and Chief business officer Omid Kordestani.

Over the last twenty-eight years, Robert has documented over a thousand weddings worldwide and created iconic imagery that has graced the covers of countless national and international publications across the globe. Robert has had the honor of being selected to give a TED Talk.

He is a recognized food & lifestyle photographer & director who will breathe a sigh of relief into your brand. His past life as a photojournalist taught him to approach his work with a sense of authenticity and he comes to every project with a great attitude and 110%. He shoots in his San Francisco studio or on location.

Driven to inspire himself and others to eat and drink healthy, Nader’s passion for good food and living is apparent in his work for Whole Foods, Fiji Water, Fairmont Hotels, OpenTable and countless restaurants and wineries. He’s been recognized by Communication Arts and American Photographic Artists. He is also a board member of the APA San Francisco chapter.

Nader recharges by camping along the remote rivers and lakes of Northern California and for this health nut, hot dogs and marshmallows are not on the menu. If you’re lucky, he’ll share his campfire Shakshuka recipe with you and talk about why he loves the gluten-free and paleo diets.

is an award winning photographer, photojournalist and speaker whose work has been published in both local and national publications like The Philadelphia Inquirer, The Philadelphia Daily News, Rolling Stone, and The New York Times. Subjects in front of his lens include local families and businesses, as well as national and international celebrities, politicians, and dignitaries. BP is the former Mid-Atlantic Chair of the National Press Photographers Association, and a former board member of the Northern Short Course In Photojournalism. He can be found speaking across the country about non-profit photography as well as photojournalists' rights.

Travis Is a Portrait and Social Media Branding Photographer, Adobe Photo Tutorial Creator, Chairman of the Board APA/NY- American Photographic Artists, Co-Host on the Video Podcast AtL : Around the Lens. Having forged his path into the world of photography after a career in nightlife and entertainment, Travis brings a sharp and unique aesthetic to his photography. Discovering a new sense of happiness and fulfillment in his work, he founded Travis W Keyes Photography and EventsOne photography in 2014. He has been focused on growing his business, craft and client list ever since. With a quick look at his work (a who's who in fashion and celebrities), one can see why he is always in high demand.

MOPLA's mission is to advance dynamic programming designed to engage and stimulate the photography community.